No, it’s not “Monday Thursday!”  Maundy derives from the original title of this day, Mandatum in Latin which meanscommanded or mandated.  In John’s Gospel traditionally read during the Maundy liturgy Jesus gives His disciples, His very best friends, a new commandment to love.  This new commandment, or mandate, is very different from the much older Golden Rule we all grew up memorizing in Sunday School.  In Matthew, Mark and Luke, Jesus’ command to love is to love others as we love ourselves.  Fascinatingly, in John’s Gospel Jesus’ command to love is not reflexive but based upon His ability to love us: Love others as I have loved you! (John 13:34)  This new command gives the day its name. 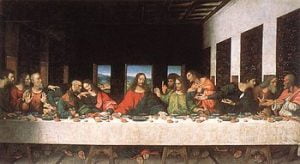 And also its character.  Maundy Thursday is a day to watch, and listen to, and feel Jesus loving us.  The day is marked by some of the most sensate and sensual worship of the entire Christian year!  We begin with a simple meal, as Jesus did.  The Gospels present differing chronologies regarding whether the Last Supper was the actual Passover meal celebrated annually by the Jewish people, or the preparatory meal the day before Passover; nonetheless, all four Gospels narrate that Jesus chose to spend His last night on earth eating a meal with His best friends.

Two amazing acts of love occur during this meal, neither fully understood by His friends until after Jesus’ death and resurrection.  Of course the first is the institution of the Eucharist, or Holy Communion, or Mass, depending upon your particular Christian denomination.  As Passover tells Jews who they are while inviting them to participate in their primary saving moment with God, so this meal tells Christians who we are while inviting us to participating in our primary saving moment with Almighty God!  Since our Anglican Book of Common Prayer cites not the Gospel accounts, but the Apostle Paul’s far earlier written account of this meal, let’s let Paul narrate the moment which Jesus commands us to continue:

For I received from the Lord what I also handed on to you, that the Lord Jesus on the night when he was betrayed took a loaf of bread, and when he had given thanks, he broke it and said, “This is my body that is for you.  Do this in remembrance of me.”  In the same way he took the cup also, after supper, saying, “This cup is the new covenant in my blood.  Do this, as often as you drink it, in remembrance of me.”  For as often as you eat the bread and drink the cup, you proclaim the Lord’s death until he returns! –   I Corinthians 11:23-26

This act of being connected with our Lord by re-enacting this final meal with his friends has become for the vast majority of Christians around the world and down through the ages the principle act of Christian worship on the Lord’s Day.  But the Gospels tell us Jesus enacted a second, amazing act of love also.

And during supper, Jesus, knowing that the Father had given all things into his hands, and that he had come from God and was going to God, got up from the table, took off his outer robe, and tied a towel around himself.  The he poured water into a basin and began to wash the disciples’ feet and to wipe them with the towel that was tied around him…After he had washed their feet, had put on his robe, and had returned to the table, he said to them, “Do you know what I have done to you?…So if I, your teacher and Lord, have washed your feet you ought to wash one another’s feet!  For I have set you an example, that you also should do what I have done to you. –  John 13, various verses

This unbelievable act of humility, taking the role of the lowest house slave and washing one the most intimate body parts rarely touched by anyone, completes Jesus’ symphony to God’s nature of divine love.  Jesus bonds us intimately to Himself in a loving bond through the Eucharist before modeling how we are to serve others in a shockingly intimate, humble way.  This poignant moment before Jesus voluntarily walks into execution explodes into Christian worship for all time!  This moment personifies every prediction Second Isaiah ever uttered regarding the Suffering Servant of God and how the Messiah-Servant would fulfill His divine mandate to save the world.

The Maundy liturgy we conduct re-enacts both these Maundy dimensions of divine love, the meal and the washing of feet.  For many it is simply too sensate and too invasive to consider, while for others it is the gateway to their authentic participation in Holy Week.  We end the service in reverent silence, stripping the eucharistic altar and washing it clean before depositing a single red rose to mark the solemnity of the moment.  We begin an all-night prayer vigil, called the Watch, to do exactly what Jesus asked of His friends, to watch with Him for even one hour.

This is how Jesus loved and loves us.  How will we respond?