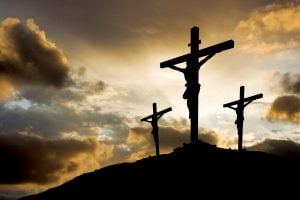 And so we come to the heart of the matter, the very nexus of God’s plan to re-unite humanity to Himself.  Good Friday is called good precisely because in Christ God is restoring His original plan to be all in all, integrated into all of existence before sin and evil infected our reality, bringing their toxic fruit of death, division and alienation from God, from our neighbor and even from ourselves.  Good Friday is somber but not defeatist; Christ’s death repairs and restores us to God’s presence, making today a triumph before we receive Easter joy!

Our Holy Week guide and pilgrim Egeria notes that in 4th century Jerusalem, the Christian community worshipped, vigiled and prayed without ceasing for over 24 hours!  Her detailed account narrates the intense emotion of Good Friday for the earliest Christians: “It is impressive to see the way all the people are moved by these readings, and how they mourn.  You could hardly believe how every single one of them weeps during the three hour liturgy, old and young alike, because of the manner in which the Lord suffered for us.”  (Egeria, Travels, para. 37:7)

For us!  Jesus’ sacrificial, atoning, horrific execution at the hands of Roman authorities in 1st century Judea…for us!  I think it paramount for us to receive this fundamental Christian axiom for Holy Week, or indeed our faith as Christians, personally as a conversion from our old life and understanding to a new life and paradigm of being in Christ.  Put differently, I do not believe it possible to be in Christ without accepting the death of Jesus on the cross as salvific for each of us personally.  The Apostle Paul, the great Doctor of the Catholic Christian faith Saint Augustine, the great Reformer Martin Luther, the profound Swiss 20th century theologian Karl Barth, even 20th century evangelists like Billy Graham, C.S. Lewis and John Stott…throughout 2,000 years of Christian experience, the greatest minds and hearts of western history have each come to this core conviction personally as this conversion to the cross of Christ has re-shaped their entire lives.

And where is the spiritual quarry, as the famed 20th century Anglican biblical scholar Dr. Reginald Fuller points out, from which these great leaders of the faith mined this core insight about the suffering and atoning death of Jesus impacting our lives today?  Well, of course, from the Suffering Servant Songs of Second Isaiah.  We have reviewed the first three such Songs during Holy Monday, Tuesday and Wednesday of Holy Week, but today of all days we turn to the crescendo of Second Isaiah’s entire prophetic corpus…the Fourth Servant Song, found in Isaiah chapter 53.  This profound Prophet of Israel’s Exile in Babylon so lyrically describes a word-picture parable of the Servant’s bracing, ultimate mission on behalf of the Israelite people, and perhaps on behalf of the entire human family:

For he grew up before him like a young plant, and like a root out of dry ground; he had no form or majesty that we should look at him, nothing in his appearance that we should desire him.  He was despised and rejected by others; a man of suffering well acquainted with infirmity; and as one from whom others hide their faces he was despised, and we held him of no account.  Yet surely he has borne our infirmities and carried our diseases; yet we accounted him stricken, struck down by God, and afflicted.  But he was wounded for our transgressions, crushed for our iniquities; upon him was the punishment that made us whole; and by his bruises we are healed.  All we like sheep have gone astray; we have all turned to our own way, and the Lord has laid upon him the iniquity of us all.  He was oppressed, and he was afflicted, yet he did not open his mouth; like a lamb led to slaughter, like sheep before shearers are silent, so he did not open his mouth.  By a perversion of justice he was taken away.  Who could have imagined is future?  For he was cut off from the land of the living, stricken for the transgression of my people.  They made his grave with the wicked…When you make his life an offering for sin, he shall see his offspring and shall prolong his days; through him the will of the Lord shall prosper…The Righteous One, my Servant, shall make many others righteous, and he shall bear their iniquities.   – Isaiah 53:2-11, various portions

I appreciate the reader’s patience with the long citation, but I feel it critically important for us to comprehend the profundity and impressive depth of pathos this Fourth Servant Song expresses.  For right here Second Isaiah, in typical soaring poetic verse, introduces a novel thought never previously articulated in antiquity: namely, that one can voluntarily accept redemptive suffering on behalf of another.  Upon this one spiritual axiom is predicated Isaiah’s greatest theological contribution to Israel’s tortured history!  The exilic prophet proposed to his people that they were chosen by God, not for special elevation and material blessing, but rather for special responsibility to carry the sin, evil and iniquity of the world squarely upon their shoulders.  In so doing, Second Isaiah states, the world itself can be healed and brought back to God’s highest and best purpose!  Thence we can say the Servant’s suffering redeems the world, borrowing economic language from the marketplace to explain God’s gracious, saving action on behalf of his people.  Their intense suffering is therefore not only explained, but transformed into a divine mission by which others are saved.

Can we then so easily see how this particular Servant Song was so generative for the earliest Christians as they searched their Hebrew scriptures for passages to explain why their Messiah had to suffer and die so agonizingly upon a cross?!  Can we not easily understand how they believed that Jesus faithfully fulfilled the Servant’s divine mission, no longer an entire nation but personified in one person?!  Can we comprehend the necessity to accept Jesus’ salvific death for us, personally, as atoning for our own rebellion against God?!

The old African-American spiritual hymn frames it so well:  “Were you there when they crucified my Lord?”  Through worship and faith, through Second Isaiah and Egeria, through the saving death of Jesus for me personally and specifically…can we answer yes?!  Let us pray:

Almighty God, we pray you graciously to behold this your
family, for whom our Lord Jesus Christ was willing to be
betrayed, and given into the hands of sinners, and to suffer
death upon the cross; who now lives and reigns with you and
the Holy Spirit, one God, for ever and ever. Amen.