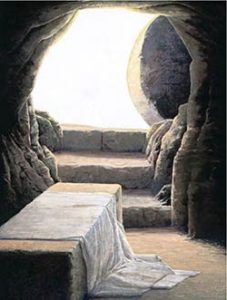 So many Christians do not even know this day exists!  But exist it does, even if briefly, and for a very important reason.  The Gospel writers and Paul use differing chronologies to explain this lull in the action of our salvation drama, bordering on a historical intermission.  For some Christ was raised “after three days,” while for others Christ is raised “on the third day.”  Creative counting in any event is required to move from Friday afternoon to Sunday morning, even as more creativity is required to begin marking the resurrection in the dark solitude of late Saturday evening for the Great Vigil of Easter.  Technically the Vigil service is not supposed to begin until after midnight for this very reason.  Only pastoral considerations drive the Vigil’s earlier start times on Saturday evening or even late afternoon; very few parishioners would endure both a 3 to 5 hour traditional Vigil beginning at midnight and then launch into a festive Easter Day morning celebration voluntarily!

Wedged in-between Good Friday’s triumphal solemnity and Easter morning’s joy is a stop.  A full stop.  A break, a bridge, a pause we call Holy Saturday.  This day’s worship in the Book of Common Prayer is the briefest liturgy in the entire book!  But why even mark this intermission at all?

The early church thought it critical to observe Holy Saturday for three very important reasons.  First, to reflect historical reality as narrated in the Gospel Easter accounts.  Jesus’ body is hastily laid in a borrowed tomb in Matthew, Mark and Luke’s accounts because the Jewish festival of Passover was upon them, and no one could touch dead flesh and still celebrate Passover.  This Torah detail nicely explains why the group of women in these gospels visit the tomb early in the morning of the first day of the following week, namely, to properly finish anointing and wrapping Jesus’ body for a burial appropriate to a Jewish man in the first century A.D.  Secondly, this chronological time period helps clarify that Jesus died an actual, physical death.  It would surprise us today how fiercely this point was contested in the first three hundred years of Christian history; many postulated Jesus either swooning (a death-like trance), or acting (as God’s Son surely could never actually die), or even faking death (as Jesus must have been a non-corporeal spirit or specter merely rehearsing death but not able to expire due to His spiritual demeanor).  The early church clung to the shocking conviction that Jesus, even being fully divine as well as fully human, died a death as surely as every human must ultimately suffer.  Please note this conviction is included explicitly in both the Apostles’ and Nicene Creeds to precisely address and dismiss these false understandings.  Put differently, Romans knew how to really kill people they wanted dead!  The third and final reason is so beautifully articulated by the Apostle Peter in his First Letter to all Christians: 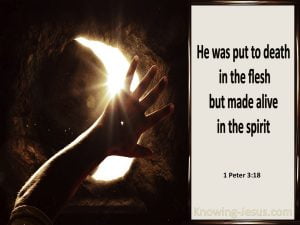 Jesus was put to death in the flesh, but made alive in the spirit, in which he also went and made a proclamation to the spirits in prison, who in former times did not obey…  – I Peter 3:18b-20a

Peter’s Letter finally explains a very logical question Jewish and Gentile skeptics both asked to the early Christians, namely, what would happen to all those who lived and died before Jesus preached the Good News?  This momentary pause in our salvific drama allows Christ to visit Hades and preach the same message of salvation to all those who lived before this moment, so that they also might believe and be saved.  This pastoral message was incredibly helpful in early Christian preaching!

Beyond those reasons, I find Holy Saturday to reflect God’s beautiful gift of sabbath rest in Holy Week.  A place to stop, breathe, pray and reflect upon the mysteries whereby God gives us our life and our salvation.  Would you care to join me in that reflection today?  Let us pray:

O God, Creator of heaven and earth: Grant that, as the
crucified body of your dear Son was laid in the tomb and
rested on this holy Sabbath, so we may await with him the
coming of the third day, and rise with him to newness of
life; who now lives and reigns with you and the Holy Spirit,
one God, for ever and ever. Amen.