Episcopal Church of the Transfiguration of Vail > Faith > March 5: Journey of Egeria 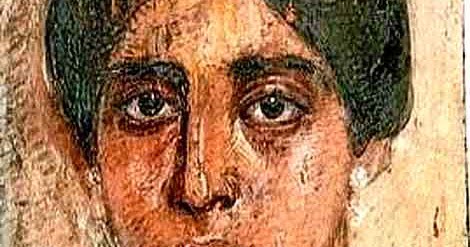 In the late 4th century C.E. (“Common Era,” our time now, the current academic terminology denoting what many of us grew up referring to A.D.), a young woman set off from western Europe upon an arduous journey.  She hailed from what we call today Spain, or perhaps southern France.  She was young enough to not only survive, but thrive as she travelled thousands of miles east on a pilgrimage itinerary which included modern day Egypt, Israel, Jordan, Syria and Turkey.  She evidenced wealth sufficient to pay for such an extended Middle Eastern tour, her visits framed by the ascendant, energetic 4th century Christianity suddenly legalized by the great Roman Emperor Constantine just a few decades earlier.

The astonishing transformation of an illegal, persecuted faith which flourished in catacombs, deserts and ports to the authorized, privileged and entitled religion of a multi-continental superpower Byzantine empire unleashed enthusiastic waves of Christian scholars, clerics and monastics upon Byzantine trading routes pioneered by Roman engineers.  Travel they did, in large numbers, to see with their own eyes where their Lord was born, ministered, died and was resurrected.  And so did this courageous and faithful young woman, perhaps a nun from a convent or simply a lay woman, with whom I am so enamoured. 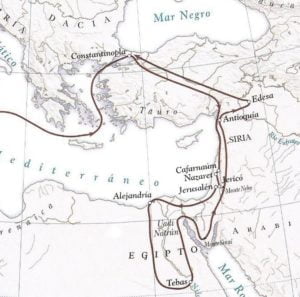 Her name was Egeria, and she kept an incredible travel journal of everyone she met, everywhere she saw and the poignant worship she encountered in Fourth century, Jerusalem.  Egeria’s Travels, of which we have a significant fragment, constitutes the earliest extant pilgrimage narrative in our tradition.  Egeria’s writings also provide a beautiful picture of Christian worship in Jerusalem in the days leading up to Easter, and during the great Easter festival of Resurrection itself.  Recovering this priceless journal allowed our churches to recover the great worship of Holy Week and Easter, including my favorite single worship event of the entire year, the Great Vigil of Easter.

I am extremely proud to have brought the Great Vigil to Transfiguration, embedding it as a foundational worship tradition here over the years.  To the right of this reflection our Holy Week schedule of worship is outlined, derived straight from Egeria as faithfully as our church can enact it.  I have striven to faithfully replicate for us what Egeria saw which moved her so powerfully.  She taught me that Holy Week is not simply the end of Lent, but itself a season of worship compacted into 7 days of intensive love, a primer of salvation for any Christian.  Egeria was the model pilgrim, one who travels from the comfort of home and hearth to seek Jesus on the road.  Like Egeria, I too am a pilgrim travelling the road to find Jesus just ahead.  I challenge you to join me for Holy Week so we can travel shoulder to shoulder from Calvary to the Empty Tomb and far beyond.