Episcopal Church of the Transfiguration of Vail > Easter > May 19: No Longer I 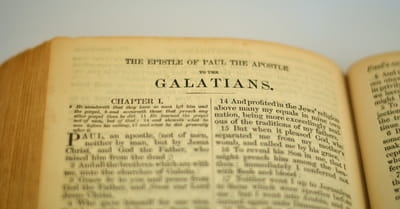 Yesterday we reflected upon the profound nature of God revealed in gospel resurrection, namely the eucatastrophic nature of God’s love, as the former great Episcopal Bishop of Colorado Bill Frey summarized with his pithy quote, “God’s never late but rarely early!”  As Easter Christians we expect eucatastrophe always!  And today, a second direct result of resurrection, one I believe is rarely discussed and less understood by liturgical (Orthodox, Roman Catholics, Episcopalians, some Lutherans) Christians.  This deep truth is axiomatic for Paul’s very essence, and should be for us.  Ready?  We are already dead.

Yes, you read that correctly.  I have almost or partially died some five to six times in my life.  I am here only because of God’s divine provision and intervention.  Aren’t you?!  Almost dying brings a searingly simple clarity to Christian faith, and Paul actually takes it refreshingly further!  To those stubborn, tall blond-haired Celts living in Anatolia’s (modern day Turkey or Asia Minor) interior, in the Roman province called Galatia, he wrote “I have been crucified with Christ and it is no longer I who live, but it is Christ who now lives in me.  The life I live now, fleshly, I live by faith in God’s Son, who loved me and gave himself up just for me!”  Paul knew my Celtic forebears needed raw, simple, “smack-you-across-your-freckled-Celtic-face” gospel truth.  To the more erudite, effete sophisticates in Phrygian Colossae further west aside Anatolia’s fertile Lycus River valley, Paul stated it more elegantly: “Set your minds upon things above, not on things around here, for you have died and your life is now hidden with Christ in God.

For one church, Paul refers to our baptism as the dying event, hence our ancient practice of submerging baptismal candidates under the water to simulate death.  For another church, Paul used the crucifixion of Jesus which we take into our bodies when we become Christian as the dying event.  The very definition of transformation axiomatically infers a departure, a demarcation, from one state of being or identity to another, new, distinct existence.  We so often rush towards the new that we rarely name the old.  Paul did, and I find him to be refreshingly candid and accurate about my lived experience of Christian faith.  And it’s not a one-time moment either.  No, there are parts of old me still falling off all the time!  Dying, rising, dying, rising….this is the familiar rhythm of Christian living.  I mean not to spiritually immiserate you today (and yes, it is a word, a really good descriptor!  Look it up!) but rather to ground us in spiritual truth.  And the other side of the resurrection experience of transformation?  That’s for tomorrow!