Episcopal Church of the Transfiguration of Vail > Easter > May 3: You Are Witnesses 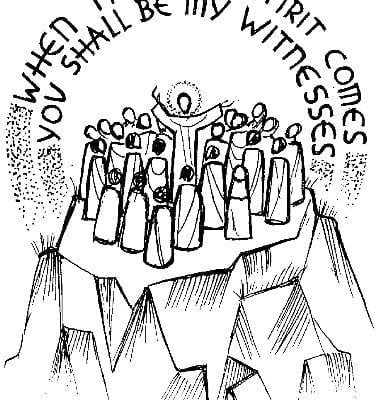 Luke 24 is truly the scriptural gift which just keeps on giving!  But sadly we have reached the end…or have we?!  Today we (kinda) close with Luke 24:44-53, again, all on this very extended Easter Day.  Again we come geographically close to Jerusalemite churches, the Lazarium, Eleona (atop the Mount of Olives for which this chapel is named) and others Egeria dearly loved during the great Christian pilgrimages of the 4th century.  But for now we are in the late 20’s of the 1st century, and before the hordes of Christian pilgrims, there was only Jesus, the Eleven (as Luke calls the disciples) and perhaps a few others by night.  Born at night, convicted at night, buried at night, and raised up in the darkness, Jesus will depart in darkness also.

Jesus once again spends his final moments on earth grounding his apprentices firmly in the scriptures, opening their minds to greater, deeper understanding.  May it be so with us this Eastertide my dear friends!  He reminds them their mission is truly global, based in Jerusalem (Luke’s church loved Jerusalem which by this time had been razed by Rome following their suppression of the First Jewish Revolt), empowered by the promised coming of the Holy Spirit to unleash them.  The original text evidently (although this is debated) has Jesus “withdrawing” with hands opened in the blessing position we use as priests during eucharistic celebration.  Later emendation added “and was carried up into heaven.”  As you may tell by now, I tend to prefer the briefer, older, shorter and often more exotic reading, so it makes sense to me that a scribe (soon after this gospel began circulating) added this portion of 24:51 to explain it.  I like it fine as is…Luke’s withdraw is appropriately mysterious for me, especially given the resurrected Jesus’ ease of porting about from here to there.  Finally then, this gospel very intentionally ends exactly as it began 24 chapters earlier…in Jerusalem’s magnificent Second Temple, with God’s people praising God for His marvelous works.  Wow.