Episcopal Church of the Transfiguration of Vail > Epiphany > Repent and Believe 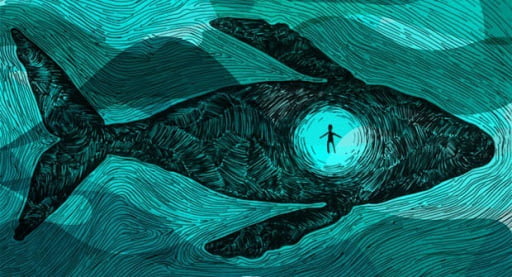 Today’s Third Sunday After the Epiphany readings are brief, compressed and summary in their liturgical form but epic in inference to our lives.  Let’s take them in turn for our devotional today…

I am beyond convinced the Book of Jonah is NOT a usual prophetic book.  No.  Something else more familiar elsewhere is going on here!  What if an anonymous Jerusalemite, living in the tumultuous period of Israel’s Restoration from Babylonian Captivity in the days of (hardcore) Ezra and Governor Nehemiah, took umbrage at the priest Ezra’s draconian and traumatic expulsion of all foreign wives and children from Jerusalem?  (Ezra arrived to a chaotic, half-re-built Jerusalem either early 5thcentury BC/BCE or late 4th century BC/BCE, bringing a literal interpretation of Torah with him; he did exile all non-Jewish wives and children but we cannot be sure of an exact date)  And what if this objecting Jerusalemite scoured his scriptures to find a prophet upon which to construct a counter-narrative to Ezra’s expulsions?  (Jonah is briefly referenced in II Kings 14:25)  And what if this Jerusalemite authored a parable, based upon said prophet with no extant history, which stressed God’s love for all people and not simply just for Jews alone?  Well, if all that were to happen….then we’d read a book precisely like the Book of Jonah!!  While speculative I don’t believe it to be far off the mark…Israel’s moral voice, the great Isaiah, gets 66 entire chapters to preach God’s message to God’s own chosen people who don’t listen at all?!  And then Jonah spouts the briefest prophetic message in the entire bible, Yet 40 days and Nineveh shall be overthrown, and the mighty Assyrian Empire, blood enemy of ancient Israel, immediately repents in sackclothes and ashes?!  Really?  And past today’s lection, Jonah gets super angry at God for always being slow to anger and abounding in kindness.  Does this, great fish and all (no whale, sorry), not sound so much (no apple in Eden’s garden either, sorry) like a preachy parable (no horse for Paul to fall off of either, sorry) or what?!!  Despite Ezra’s thundering reforms of racial purity, God’s plan was bigger.

And speaking of Paul….in this parish we really don’t need to hear that we who have spouses must act as if we had none!  (And easy conclusions are NOT what Paul had in mind for the record dear readers…don’t get too excited!) The focus on today’s I Corinthians reading is much more upon the For the present form of this world is passing away comment…Paul admonished his Corinthian neophyte believers to not fall in love too much to this world and all their creature comforts, a timely message for Epiphany Christians travelling like Magi between manger and cross.

But the Gospel, as usual, is the climax of today’s scriptural summation.  Like Jonah, Jesus had a clarion clear, brief prophetic message to proclaim, but only after John the Baptizer’s arrest (and swift execution, remember?): “The time is fulfilled, and the kingdom of God has come near; repent, and believe in the good news.”  This earnest request was Jesus’ entire message in the Markan tradition, every word a masterwork of salvific import!  After all the long centuries and countless generations, it was time for Christ to reveal Himself right then.  Why?  Because God decided it was time.  The kingdom of the heavens is….a big verb in Greek which basically means “breaking in now!”  Intruding in our space, knocking upon our door, gettin’ in our grills.  We are commanded by Jesus to do two very significant things, axioms for every believer.  Repent and Believe.  Repent appears 78 times in scripture; it means to literally re-orient and proceed in a very different direction.  Believe appears 289 times; it means to put fealty towards or entrust.  In this case, repent away from and believe towards the Good News, the very message of God wanting us to be intimately aligned with and connected to His own nature forever.  Period full stop.