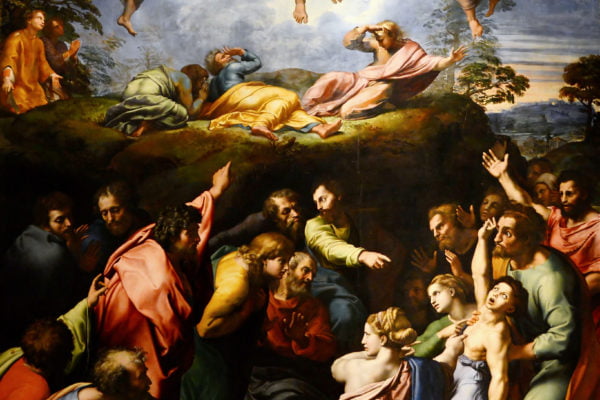 After preaching upon the Transfiguration twice annually these past 25 years, I cannot escape this utterly provocative, preternatural moment of Jesus’ earthly ministry.  It is endlessly invitatory, proffering new insights whenever I look.  Therefore I offer several visual presentations of the Transfiguration for your Epiphanic reflections.  I pray you enjoy them as much as I have over the years, visiting each of these theological and artistic masterworks firsthand.

Transfiguration, Cappadocia.  (Please scroll down the page to the 14th image and click on it to view it in detail!)  This treasure is courtesy of 11th century Byzantine monks residing in the soft volcanic ash rock of Cappadocia in central Turkey.  Cappadocia presents an otherworldly, spiritually compelling nursery of vertical stone fairy chimneys reminiscent of our neighboring hoodoos of Utah’s Bryce Canyon National Park.  Christian monks fleeing persecution settled there before discovering the rock’s ability to be easily carved and hollowed out into vast artificial interior chapels resembling large basilica churches.  I’m talking two to three storey interior churches with balconies, choir lofts and upper porches all carved from living stone!  And they painted ornate scriptural scenes upon which to meditate.  This Transfiguration resides inside Karanlik Kilise, Turkish for the Dark Church, itself located within a larger compound of cave churches now called the Goreme Open Air Museum.  It’s part of a 13 panel series of the life of Christ painted onto the stone ceiling.  Note the artist’s use of rich, deep color dyes and elaborate detailing, always with the transfigured Christ geometrically situated dead center.  On stone, upside down on a ceiling.  Honestly a Turkish Michelangelo!!  Note also the gauging of the disciples’ eyes while Jesus, Moses and Elijah have been spared this defacement.  After the Christian Turks were expelled from Turkey in the early 20th century (all of them, look it up), Muslims defaced every single picture in these chapels by digging out the eyes of biblical figures.  Except Jesus, here.

Transfiguration, Sinai.  The oldest Transfiguration we’ll consider, in one of the oldest Christian chapels within the oldest continuous Christian monastery in the world.  Welcome to the Chapel of the Virgin, Saint Catherine’s Monastery, in the moonscape of the south Sinai wilderness.  This mid-6th century AD/CE surviving mosaic may well have been commissioned by the great Byzantine emperor Justinian himself!  Note the gold paint dramatically presenting all the Transfiguration characters within an apse (eye-like) outline, with Jesus cocooned within a sumptuous dark blue mandorla again dead center.  Here Jesus is adorned like a proper Byzantine monarch, his regal white garment fringed with gold, his right hand modeling the “You’re okay with God!” symbol of blessing with fingers touching.  Amazing artisanship in the middle of the wilderness, featuring local Sinai hero Moses also.  Saint Catherine’s is situated at the base of Mount Sinai and contains the reputed burning bush within the monastic enclosure.

Transfigurazione, Roma.  Referred to for centuries prior to the 20th century as the most famous oil painting in the world, this ginormous (I mean, super-jumbo-extra large like over two storeys tall) late Renaissance masterpiece is the crescendo of the Italian artist Raphael’s illustrious if brief career.  Legend holds he painted it from the ground up, pausing to prayerfully complete Jesus’ face just days before he died in 1534 AD/CE.  It faced him on his deathbed, was displayed at the Louvre by Napoleon Bonaparte, and finally repatriated to Rome where is enjoys pride of place in the Pinacoteca Vaticana, the Vatican Museum, Vatican City.  The lower segment is crowded with onlookers, actually including a healing scene following the Transfiguration (the boy raising is hand trying to be called upon in the lower right, held up by the man in a green tunic with that “I dunno how it happened” facial expression), while in the upper frame the flattened disciples cannot even bring themselves to gaze upon their transfigured Lord (look closely, Peter’s eyes are shut).  Moses and Elijah, however, remain fixated upon Christ, and some scholars believe Jesus was modeled after a Herculean Greek sculpture to make Jesus even more monumental.  I love that Jesus is actually Himself looking and gesturing to our Heavenly Father, upwards of course.  Raphael’s energetic presentation is so palpable I wonder if he even knew how close he was to death.

Ponder, gaze, explore the mystery of Transfiguration dear readers.  And, as today’s title suggests, we aren’t quite done yet!!