Episcopal Church of the Transfiguration of Vail > Epiphany > Absalom 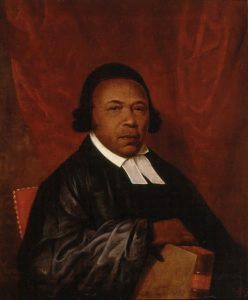 It has been my honor to introduce you to many varied Christian personages throughout these reflections and devotionals, many you already know at least by reputation.  It is my honor to introduce you to our last saint, one you may not know, but one of our most significant.  Today marks the death day, and therefore the Feast Day, of the Reverend Absalom Jones (1746-1818), Abolitionist, Preacher and Pastor.  And so much more, because he was among the very first to stand against slavery in America while bringing others with him at great personal risk to himself.

Father Absalom’s story is replete with iconic moments…please read more here.  He was a native Delawarean, educated to read and write.  He was manumitted, purchased his wife and children’s freedom, preached as a licensed layman, established the first African-American Episcopal Church, was ordained the first American-American deacon and priest in the then fledgling Episcopal Church, petitioned Congress to abolish the Fugitive Slave Act of 1793, ministered to victims of Yellow Fever earning the respect of white Philadelphian progressives.  This man literally was America’s proto-saint.  Revolutionary War, War of 1812, 5 Presidential administrations, empowerment organizations and churches for African-Americans….through it all, Absalom Jones was a towering moral force for colonial America and especially for the Episcopal Church.

Father Absalom was reputed to be an excellent preacher.  On New Year’s Day 1808, Article 1, Section 9, Clause 1 of the United States Constitution literally expired by congressional decree, a historical oddity of any constitutional provision with a time expiration attached in advance.  It provided for a 20 year time period to pass after the Constitution’s enactment before Congress could restrict the importation of enslaved persons (one of the compromises to bring southern states towards a constitutional democracy).  Congress passed that restriction in 1807 and an eager President Jefferson signed it immediately.  Father Absalom preached one of his finest messages on that day, the Thanksgiving Sermon, widely read and admired.  Take some time to listen to him by reading here.

Join me in remembering the life of one of our very own American saints, a courageous and visionary man.  And pray with me please:

Set us free, heavenly Father, from every bond of prejudice and fear; that, honoring the steadfast courage of your servant Absalom Jones, we may show forth in our lives the reconciling love and true freedom of the children of God, which you have given us in your Son our Savior Jesus Christ; who lives and reigns with you and the Holy Spirit, one God, now and for ever. Amen.