Episcopal Church of the Transfiguration of Vail > Christmas > Fourth 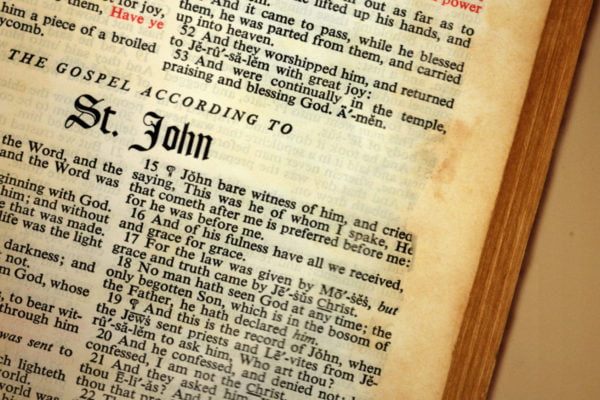 Andrew, Nicholas, Lucy, the Baptizer, Mary, Thomas, Stephen…our list of hagiography (fancy vocab for saintly biography) for Advent/Christmas/Epiphany is power-packed and star-studded.  Today is no different!  At least one and sometimes two Sundays fall in Christmastide but saints’ calendar days remain fixed by tradition.  Let’s celebrate the First Sunday of Christmas a bit later; heck, the gospel today is from John’s famous Prologue (John 1:1-18) anyhow!  Dear readers, today is the Feast Day of Saint John the Evangelist, the Beloved Disciple and (original) author of the Fourth Gospel.  As Anglican Christians, we are most at home in the Johnannine world, and perhaps most naturally familiar with and inclined towards John.  Think about it…the Baptist’s There is the Lamb of God, John 3:16, For God so loved the world, 3 year chronology of Jesus’ ministry, foot washing at the Last Supper, Lazarus, Thomas, Andrew talking, wishy-swishsy Pilate, Mary at the foot of the cross, the cosmologic Prologue (In the Beginning, the Light shines in the darkness), all those I Am statements of Jesus, signs not miracles, and Jesus talking for several chapters of the Last Supper.  We are, all of us Episcopalians, theological grandchildren of the Johannine church.

Who was John?  The Baptizer?  The brother of James?  The Beloved Disciple, or as Raymond Brown call him, BD for short?  John of Patmos, the author of Revelations?  Another late 1st century shadowy figure sometimes called the Presbyter?  Despite all those Sunday School lessons, harmonized gospel accounts and (awful) 1970’s gospel mini-series, I find it extremely unlikely all these Johns are the same man, absent the Baptizer, especially given the very late 1st century dating of Revelations.  The Romans didn’t send nonagenarian retirees into exile on Aegean Sea islands; they sent revolutionaries actively threatening social order.

For me, American biblical scholar/superstar Raymond Brown’s career academic focus on BD is persuasive.  For me, BD’s frequent appearance in the Fourth Gospel betrays his status not only as the closest confidant of our Lord, but undoubtedly also as the venerated founder of the church which produced the Fourth Gospel.  He was seated closer to Jesus at the Last Supper than was Peter, he knew the house staff of Jerusalem’s High Priest, he was entrusted by his tortured Lord with caring for Mary as his own mother (a sacred trust and burden in that society as he may well have already had his own aging mother), and he outran Peter to the Empty Tomb.  By long tradition he founded a church in or near Ephesus, bringing Mary there with him.  He authored, or authorized, the first edition of what we possess as the Fourth Gospel.  He was so loved the rumor arose in the church that he would not die before Jesus returned.  They were all devastated when he actually died of natural causes.  We are all beneficiaries of his towering legacy of faithful lifetime fealty to his Savior and Lord.