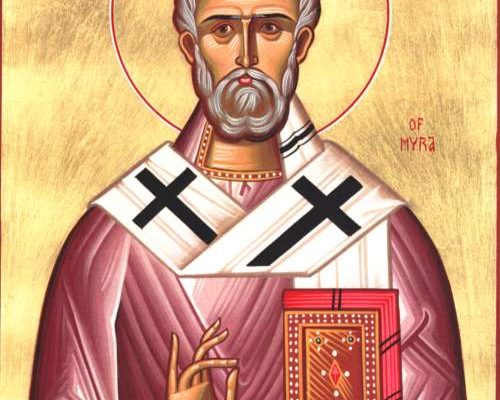 Today is the second of our significant holiday Saints Day’s, the Feast of Saint Nicholas of Myra.  Nicholas is an early church rock star in the Orthodox Christian tradition, consequential for all Christians although he is particularly venerated as the patron saint of children, sailors, archers and prostitutes among others.  His cult (the expression of piety towards an individual saint) is extensive both chronologically and geographically, his biography a fascinating study of early Christian piety.  Born in Patara, Lycia (modern day Antalya Province on Turkey’s southwestern Mediterranean coast) in or around 270 A.D., legends tell of Nicholas’ family wealth and his conspicuous generosity.  Our major tale narrates an impoverished neighboring family whose father was forced to sell his three daughters into chattel slavery.  A shadowy figure with a cowled cape furtively left a bag of gold coins on the family window sill each evening for three consecutive nights, purchasing the freedom of each daughter by providing the required dowry for the girls to marry and not to be enslaved.  The astonished father lies in wait on the third evening, discovering the young philanthropist leaving the final bag of gold, though Nicholas pleads with the grateful man to never reveal his true identity.  A later tale credits Nicholas with resurrecting three young boys who were about to meet a very graphic (and not devotional-approved), grisly end.  Was Nicholas persecuted under the religious pogroms of the mad Emperor Diocletian?  Was he present at the First Council of Nicea, the distinguished gathering under the Emperor Constantine which produced the Nicene Creed?  Was Nicholas disciplined by Constantine himself for striking a theological opponent to orthodox Christianity during the Council?  Did Nicholas calm a storm, like Jesus, during a terrifying sea passage?  Did he miraculously multiply a shipment of wheat after imploring the sailors taking it to the Byzantine Emperor from Myra to leave some small portion behind to feed the starving citizens there?  Did the shipment really arrive to Constantinople twice as large as what left Myra?!

All these fascinating tales, and many more, point to Nicholas’ consequential ministry and profound influence in those harrowing days of the early church.  We know he was priested and made bishop of Myra, another port town on (now) Turkey’s southwestern coast.  We know he died on this day, December 6th, 343 AD/CE.  We know his cult exponentially expanded after his death likely due to his relics (skeleton) miraculously secreting annually a liquid with supernatural healing properties.  We know his relics were taken from Myra to Bari, Italy and some later to Venice for “safe-keeping” by reputedly pious Italian mariners concerned that Moslem raiders would steal them (so they stole them first….right!).  And for our purposes, we know that European crusaders based in Bari and saw Nicholas’ basilica there before launching off to the Holy Land, and those fortunate enough to return home alive brought with them amazing tales of this secretive generous saint so philanthropic to children at night.  Yes, dear readers, Anatolian/Turkish Nicholas was exported to Europe (as were various pieces of his miracle potion-producing relics) as the Dutch Sinterklass, the English Father Christmas, the French Pere Noel, and finally, our very own Americanized Chris Kringle or Santa Claus.  Did you leave your Christmas gift list in the wooden shoes by the door with treats?  What’s this piece of coal under my pillow…again?!