Episcopal Church of the Transfiguration of Vail > Epiphany > I Am Jesus 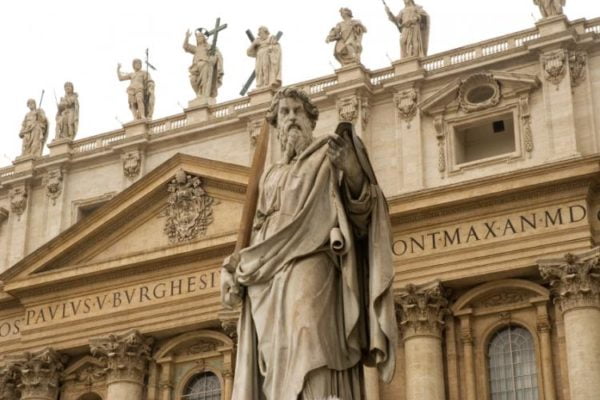 One week after the first church pillar, Peter, comes the other twin Christian tower.  Today we mark the Conversion of Saint Paul the Tardy Apostle, Apostle to the Gentiles, and perhaps among the primary reasons any of us are Christian at all.  Oddly, he only has two names, שָׁאוּל, Shaul in Hebrew and Παῦλος, Paulos in Greek from a Latin root.  Paul’s names allow him to navigate the riot of 1st century Mediterranean cultures like a native, a true linguistic and cultural polyglot.  His multi-continental travels are epic, arduous and western-world founding.  He was trained in Jerusalem by the leading rabbi in all Judaism, groomed from childhood to take his master’s place of scholastic and scriptural Jerusalemite preeminence by mid-century.  He was born a Roman citizen of Anatolia, able to inhabit Greek rhetoric or Jewish midrash with equal acumen.  He suffered unthinkable deprivation to share the Good News that Jesus was not only Israel’s Messiah, but the Lord and Savior of all humanity, and that proclamation initiated a new humanity and revolutionary civic re-ordering of human society.  He founded Christian communities in most of the eastern Roman Empire before planning to travel as far as the Iberian (modern Spain) peninsula to Christianize the western Roman Empire also.  Paul, like Peter, was arrested and taken to Rome to be adjudicated as a Roman citizen, his right under Latin jurisprudence.  Strong tradition records Paul was beheaded, as befitting a Roman citizen, sometime in Nero’s religious genocidal bloodbath before 68 AD/CE.

Paul is credited with spearheading the evolution of Jesus-worship from a small Jewish Jerusalemite sect to international and multi-continental prominence.  He baptized the first recorded convert on the Eurasian continent.  He contributed the second most prodigious amount of textual New Testament material only after Saint Luke.  His vision of geographically distant house churches functioning as a collective paved our understanding of the church’s unity today.  Paul and Peter are ubiquitously captured as the two pillars/towers/columns between which worshippers must pass on the frontals of thousands upon thousands of church facades.  Look for Paul, often pictured with a sword (helpful beheading visual reminder), perhaps holding a scroll and always with a ginormous forehead (because he’s so smart).

And it’s all possible because of one moment in time.  A moment narrated in Christian scripture at least four times (Acts chapters 9, 22 and 26, Galatians chapter 1 if you’d like to refresh.  I like to read them consecutively and pay attention to the differences!).   A moment historian Kenneth Latourette describes as “one of the most important events in the entire course of Christianity.”  Saul is marching to Damascus to arrest Jesus-worshipping Jews (before the name Christian was coined) and drag them back to Jerusalem for questioning and execution.  On the road he is blinded by a vision so luminescent he remains unsighted for three days.  In that world-changing moment Saul sees and hears the Resurrected/Transfigured/Ascended Jesus introduce Himself before querying the future Paul why he is so persistent in persecuting…Him!  Disabled Saul doesn’t need long to realize his lifelong dream to see Israel’s Messiah has finally been realized….just not the way he ever anticipated.  Pray with me:

O God, by the preaching of your apostle Paul you have caused the light of the Gospel to shine throughout the world: Grant, we pray, that we, having his wonderful conversion in remembrance, may show ourselves thankful to you by following his holy teaching; through Jesus Christ our Lord, who lives and reigns with you, in the unity of the Holy Spirit, one God, now and for ever. Amen.