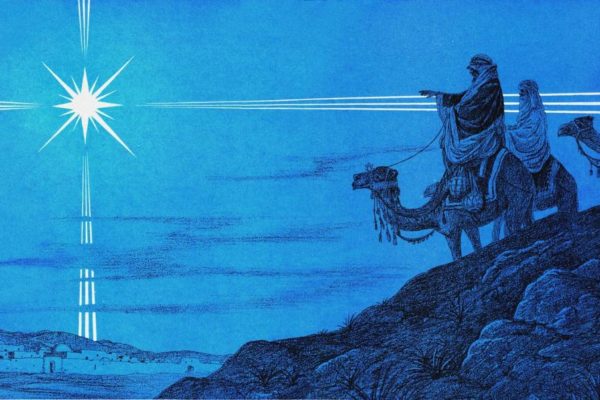 Hard to fit all this consequential Epiphany material into just one day!  Magic’s just like that!  So, our Matthean magi dressed up by Christian legendariums then…(and legendariums are blocks of narrative material of unsure, mythical or non-evidentiary attribution!).  The three Mag…no, wait, oops, Matthew never enumerated three.  Legendary.  Trinitarian overlay?  Three great Gentilic empires renowned throughout antiquity all to the mythical east of the Holy Land…that sounds promising!  Time to chart the star’s movement, overlay on a map, take a (conveniently well-traveled by now) Spice Route west, pack some snacks, take a trip, give Jesus time to age a bit…yeah, about two years sounds right, the precise chronology Herod chose to complete the generational genocide Matthew narrates.  And we all know the names of these sage scientist-explorers who came…well, all of us except Matthew who never attributes any names or countries of origin!  Legendary.  Melchior, the magus from Persia, Caspar, the Indian magus and Balthazar the Babylonianmagus (who had not existed as a sovereign power for over 500 years at this point but whose territory was annexed by Rome’s neighboring competitor the Parthian Empire), all named by legend.  All could well have afforded the extravagant gifts they carried and all came from the mysterious east.

They figure out Herod’s maniacal tendencies in about five seconds, and promptly ignore him to find, as you know from your beautiful creches, the Holy Family surrounded by adoring shepherds and lots of farm animals….wait, wait, actually Matthew curiously lists only Mary with her son, and in a house with no animals anywhere.  Hmmm.  Time has passed, and Joseph is not mentioned.  This story is from a differing Nativity tradition from the rest of Matthew’s account where Joseph is featured so prominently!  The Magi have been represented in icons and art as three differing ages of a man, vastly different in mostly opulent dress (everyone would wear their Sunday best when they travel the Spice Routes to draw attention to how wealthy they are?!) , and whose gifts have been interpreted about one million different ways.  I prefer the “prophetic gifts” way, where each gift predicts the babe’s future as our Savior: gold for kingship, frankincense for priestly sacrifice, myrrh for burial spice.  Where those gifts went, scholars have no clue.  But a travelling refugee family would need something with which to barter for food, water and shelter after all.

As you can tell, Matthew’s laconic account has invited every kind of creative reflection on these enigmatic, courageous pilgrims.  But at root, I believe Matthew included this story because it was so well attested from his sources, it does fit his platform of Gentile inclusion in the nascent Judaic-Christian movement, and it’s just so…cool.  Last story before we leave our intrepid magi, a true historical tale.  When the Muslim caliph Umar came storming across the Fertile Crescent in his conquest of Persia and then the Mediterranean basin of the Byzantine Empire in the early 7th century AD/CE, his armies destroyed or defaced many Christian holy sites…except one.  The lonely, exposed Church of the Nativity in Bethlehem, the oldest site of continuous Christian worship anywhere in the world, was not only spared by Umar’s generals but protected also.  Why?  Because the Muslim soldiers took the time to look at the iconography of this Byzantine church and saw pictographs of eastern royalty who looked like, dressed like and traveled like them.  They reasoned that if their own forebears had been received with respect near this church, then it deserved veneration and not desecration.  They were looking at the Magi following the star.