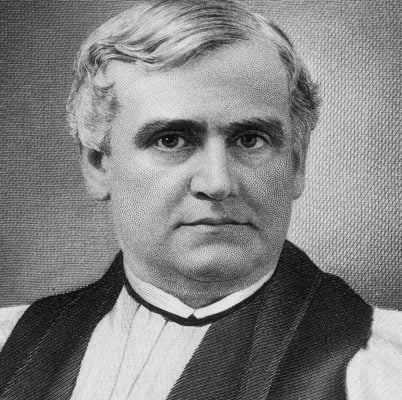 Not all saints inhabit distant antiquity.  For Episcopalians, today is the Feast Day of Phillips Brooks, Priest, Bishop, Homilist and Hymnist.  Brooks belongs to the 19th century, 1835-1893, a period of sustained turbulence for mainline American Protestantism.  He was born a Boston blueblood; his great grandfather opened uber-crusty Phillips Academy, Andover, Massachusetts, and Phillips and his brothers were educated in elite Boston prep schools before shipping off to Harvard.  Brooks graduated Harvard in 1855 at the age of 20…wow.  He was fired from an early teaching job and lamented “I do not know what will become of me and I do not care much.… I wish I were fifteen years old again. I believe I might become a stunning man: but somehow or other I do not seem in the way to come to much now.”

After his PPP episode (remember PPP from an earlier devotional dear readers?) Brooks attended Virginia Theological Seminary, graduated and was ordained deacon and priest.  He rapidly rose to national prominence through his prodigious preaching, gaining respect for his published sermons upon Abraham Lincoln’s death and Harvard’s Civil War commemoration.  In 1869 Brooks was called to one of the Episcopal Church’s premier pulpits, Trinity Church, Copley Square, Boston, a fitting national platform for Brooks’ leadership presence and homiletical voice.  (Interestingly three of his five brothers were also ordained as Episcopal priests!)  Both he and Trinity grew apace during his rectorate lasting over 20 years, as Brooks helped rebuild Trinity to the church we see today following the Great Boston Fire of 1872.  (A contemporary declared the new sanctuary an American Hagia Sophia….it featured one of the first free-standing altars anywhere in the Episcopal Church, as the rest were still attached to the chancel back wall)  The year before he came to Trinity, Boston, Brooks penned a Christmas carol lyric based upon his recollection of visiting Bethlehem years earlier.  He pressed his organist Lewis Redner to compose the tune, although Redner waited literally until the night before the church was to sing it.  Redner recalls being awoken in the night with what he called an angel strain into his ear, dashing off the tune just in time for morning worship.  Neither Brooks nor Redner thought it would be sung more than one holiday!  Little did they know…

Brooks was consecrated Bishop of the Episcopal Diocese of Massachusetts in 1891, only to die prematurely in 1893 at the age of 57.  He never married nor had children.  His legacy includes theological education, towering intellect and an instinctive ability to communicate Christian faith through preaching.  He preferred preaching from a small lectern and not from those monumental elevated pulpits.  I wanted you to know this Episcopal saint for many reasons…perhaps because, if one looks long enough, one can find oddly personal connections with Christian forebears.  I feel a kinship to this man who died the year my maternal grandfather was born: we do share a name, we both attended the same seminary, we (kinda weird this one) bear some passing physical resemblance to each other, and we both love to preach.  I love it that he worked so hard locally in Boston that Trinity Church earned a reputation for community service.  I pray Transfiguration might enjoy some small dimension of that same story….