Episcopal Church of the Transfiguration of Vail > Epiphany > Send in the Eagles! 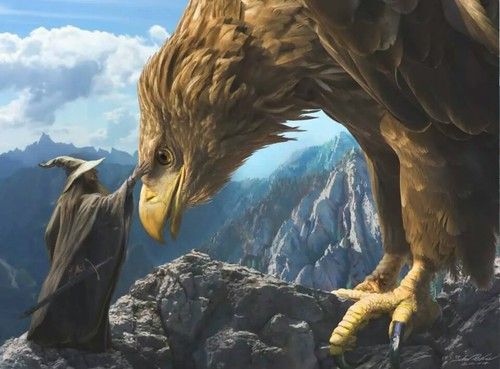 Anyone who knows me well knows my disinclination for late 1960’s/early 1970’s American pop music, some of which tragically made its way into the Episcopal church of my childhood.  While Bob Dylan’s Blowin’ in the Wind performed by earnest young south Tampa mothers learning to play the guitar was scarring enough, and some of my older friends had to convince our church that Peter Yarrow’s (yes, that Peter, as in Paul and Mary) Puff the Magic Dragon was NOT simply a winsome children’s song to be performed at the afternoon folk mass (I still shudder with these painful memories), and while our Episcopal Day School thought teaching us the Limeliters/Pete Seeger/The Byrds Ecclesiastes’ inspired Turn! Turn! Turn! was a great way to encourage scripture memorization, these pale in comparison to the utterly…worst…song…ever…recorded.  One morning at Saint Mary’s Episcopal Day School chapel, a priest exited the sacristy dressed like…a clown.  A real circus clown, evidently influenced by the recent Broadway success of Godspell’s white-face Jesus.  Then, in a liturgy designed to insure every student present would become a confirmed adult atheist haunted by deeply emotional traumatic issues, they played…can you guess…Stephen Sondheim’s Send In the Clowns.  And we proceeded to have what is now called a Clown Mass.  Seriously.  A clown eucharist.  Receiving communion was utterly terrifying, like feeling Ronald McDonald’s hot breath as the red nose came closer…and closer…and still closer.

All the while, J.R.R, Tolkien had it right.  We don’t need clowns, we need eagles!  In Tolkien’s Middle-Earth legendarium the eagles are God’s custodians of the world, massive supernatural creatures untainted by evil’s corrupting influence.  The eagle intervene only at greatest need and always against the designs of the Enemy, protecting our heroes and empowering them to complete their adventure to save Middle-Earth.  And where did Tolkien get such a notion?  Perhaps from today’s money verse, embedded at the end of our first reading from the prophet Isaiah:

31 but those who wait for the Lord shall renew their strength, they shall mount up with wings like eagles,
they shall run and not be weary, they shall walk and not faint.

I’ve taken a comedic tone for today’s devotional because this past week locally has been so horrid.  But please don’t miss the powerful consolation Isaiah is speaking into the hearts of those hollow, shattered Jerusalemite refugees forcibly relocated to Babylon after the Babylonian king leveled their beloved city and temple.  Their trauma is physical, and God knows their pain.  God promises through his prophetic emissary that His people will endure their catastrophic tumult to soar like the majestic eagles they loved to watch, with impossibly long wings outstretched wheeling elegantly upon the afternoon winds.  It is such a poignant and empowering prophetic oracle which they so desperately needed to hear.  And dear readers, so do we!  We need the Isaian reminder that God’s grace is always sufficient for us, that we walk and run and fly by faith and not by logical sight, that God’s unlimited power is perfected precisely through our weaknesses, that God’s power animates us at all times.  We will endure these days just as Isaiah’s broken refugee audience endured theirs.  Tolkien had it right all along, we need God to send in the eagles!  P.S. The word eagle or eagles occurs over 50 times in scripture, while the term clown does not appear even once.  Just as it should be.