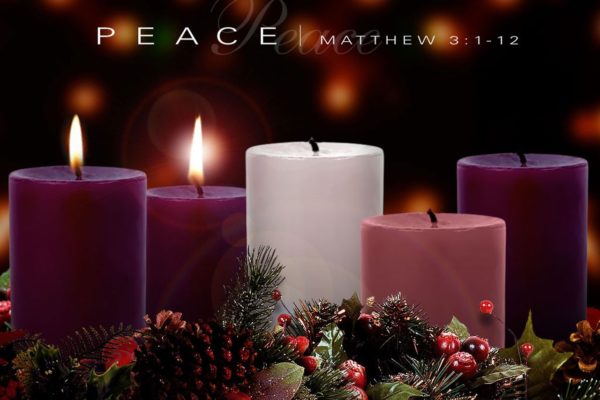 The theme of our second Advent candle, and pervading this entire week, is Peace.  The very words sound comforting in their native tongues, Shalom in Hebrew, Eirene in Greek (from which we derive the English name “Irene”).  Used almost 250 times throughout Holy Scripture, our English term struggles to contain the depth of meaning provided by ancient languages.  Shalomcarries a strong send of completeness, wholeness, soundness, and safety.  When babies are born healthily and mothers survive, when crops planted are harvested in abundance, when the precious metals are beaten into plowshares and not into swords, when Torah was being observed with her various statues and ordinances, when….well, let’s just say when ‘kerchief and cap are nose to nose (borrowing from another, more recent American source)…..then shalom is present.  Eirene conveys a bit more tranquil sense while retaining the completeness shalom captures also….quietness, rest and maybe the root of the Greek verb to join.  Both terms convey balance, health in context far more than the absence of conflict.

Biblical voices offer beautiful teachings on peace.  Jeremiah railed against those who falsely comforted God’s people in a severe crisis, claiming they spoke “Shalom, shalom” when there was no shalom to find.  Job predictably sought peace but received only turmoil, a great descriptor for anti-shalom.  The Psalmist says that shalom and tsedaqah (righteousness) cozy up to kiss each other in God’s world, implying that peace always accompanies alignment with God’s purposes for our life.  The Sage who collected proverbs says. “Better a dry crust with peace and quiet than a house full of feasting, with strife!”  Amen brother.  The author of Ecclesiastes reminds us there is a time for conflict followed by a time for peace.  Isaiah famously (Danke schon Herr Handel!) prophecies the coming Messiah will be the very Prince of shalom, and later, by the Suffering Messiah’s wounds we are given shalom.  This prophetic oracle was announced over 500 years before Jesus was born!

The angelic choir in Luke’s monumental Nativity narrative, which we’ll be visiting again shortly, sang that Jesus’ birth heralds glory in heaven and eirene upon earth for those God favors.  Jesus taught that eirene-makers will be blessed and that eireneshould be our first greeting when we enter a house.  And indeed, his first word to the astonished disciples after the Resurrection was eirene!  In Matthew’s Gospel our Lord chides his disciples that He came not to bring eirene to earth but rather a sword, while in John’s Gospel Jesus says he gifts an eirene which the world can never give.  Hmm.  The Apostle Paul picks up that thought when he wishes the Roman church eirene which surpasses all human understanding, and by inference, generation.  Watch that second innocent looking Advent candle!  There seems to be a whole lot surpassing our comprehension here!