Episcopal Church of the Transfiguration of Vail > Epiphany > Three 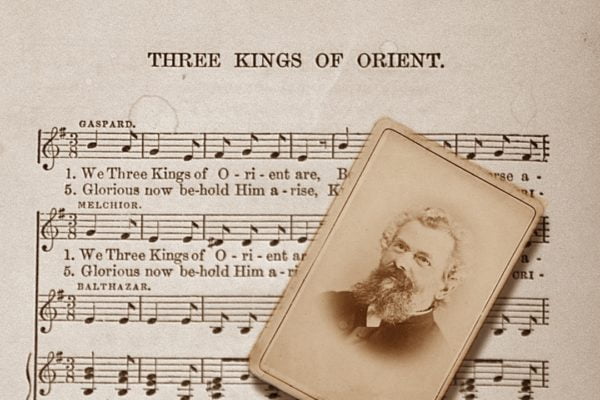 Like Advent and Christmas, Epiphany enjoys some customary hymnody.  I am pleased to share this first significant American contribution to the classic holiday hymnody of the Episcopal Church.  Yep, We Three Kings of Orient (the hymn’s technical name) is thoroughly domestic!  Lyrics, ‘Merican!  Tune, ‘Merican!  Composer of both (quite rare in the 19th century for both lyrics and tune to originate from one source), ‘Merican and “Piscopalian to boot!

The Reverend John Henry Hopkins, Jr. composed Three for a Christmas pageant in New York City in 1857 while serving as Rector of Christ Episcopal Church in Williamsport, Pennsylvania.  It was published in an American hymnal before porting to England for inclusion in a British Carol collection.  Father Hopkins was an accomplished cleric, a son of an Episcopal bishop who served as a journalist, studied law, wrote other music, preached President Ulysses S. Grant’s funeral service and was a long-time rector.  His nephew namesake, Hop the Third, composed the beloved I Sing A Song of the Saints of God!  Wow!

Three’s tune evokes a middle eastern, more somber tone while the lyrics were designed originally to feature three soloists before uniting to finish with the last triumphal verse.  Three’s phraseology is memorable…I learned the word “nigh” from this hymn, and during Holy Week who doesn’t recall Hopkin’s laconic summary of the Passion of our Lord as each word lands like a hammer blow, “Sorrowing, sighing, bleeding, dying, sealed in the stone cold tomb!”  And of course, I guess everyone in the 19th century really liked singing “Oh’s” a whole lot.  The song is masterful for education, reflective of it’s pageant design.  I know we can’t sing together right now, but do Father Hopkins, me and Epiphany a favor….give it a go in private and enjoy some Epiphany tones!