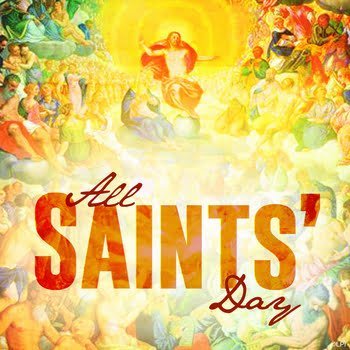 I’d like to close our liturgical calendar circle by re-visiting the final significant holidays of the Christian year we missed previously.  Come fall harvest time, as agricultural societies the world over frantically harvest their crops and autumnal leaves adorn forests everywhere, the church also reaps a harvest.  Long before American Thanksgiving was established (Washington supported this idea, while Jefferson opposed it…of course…until Abraham Lincoln proclaimed it in 1863 and Congress enshrined it as a national holiday in 1941), our Christian forebears marked fall with All Saints and All Souls’ Days.  A harvest of souls if you will!

Origins of the All Saints cycle are a bit murky.  Egeria does not mention it, meaning these observances were not visible to her in the late 4th century AD/CE.  Pope Boniface IV consecrated the Pantheon (coolest dome in Rome by a country mile in my opinion!) to the Virgin and all martyrs in the early 7th century, choosing May 13th for his festival.  Some scholars believe the date was Boniface’s attempt to supersede the Roman pagan festival of Lemuria, an ancient holiday designed to exorcise haunting spirits of dead relatives or other bad spirits not wanting to leave your home.  Envision a scarier Roman version of Mexico’s Día de los Muertos absent the tamales and margaritas!  8th century Pope Gregory III fixed the date on November 1st commemorating Saint Peter and all the holy apostles and saints, and there it has remained.  The night before is All Hallow’s Eve (the descriptor means holy) or Halloween of course.  The day after All Saints is what our Roman Catholic friends call All Souls and Anglicans call the Feast of All the Faithful Departed.  All Saints for our Christian superheroes and superheroines of the faith, All Souls for our own personal saints of hearth and local square.

Every culture wrestle with (vocabulary spoiler here, get ready for some!) thanatology, the scientific and philosophical study of death and dying.  Logically, the reality of death and the sanitary disposition of bodies occupy every stage of recorded human history.  With these feasts the Church makes a clear statement on what might be called pastoralthanatology, candidly acknowledging death beyond its biological detail.  No, our Christian forebears included those faithful departed within the loving eternal purview of the Good Shepherd who loses not even one, and through whom all are gathered at the Consummation of the world (whether living or dead) for judgement and redemption.  The resurrection of Jesus destroyed death to bring life and immortality to light according to the Prayer Book tradition.  So, harvesting in the fields outside and harvesting of souls inside the parish church in the fall!