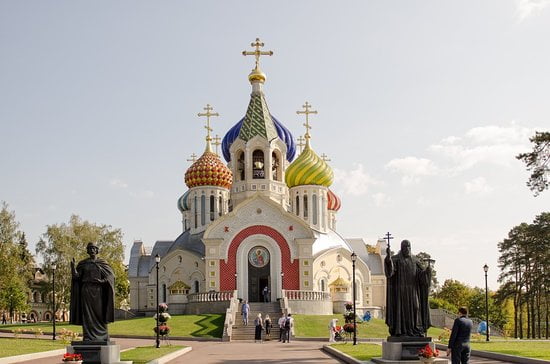 I ask for your patient indulgence, dear readers….there is simply too much quality Transfiguration to squeeze into one devotion only!  Let’s view some more outstanding Christian visual, theological art today.

Transfiguration, Galilee.  Drive with me up a dizzying, curvaceously winding road as we steeply ascend a geologic butte (technically a monadnock but for us western Americans butte is more familiar, but have a care with that pronunciation, as in Caddyshack’s ancient golfer “Hey hon, that shot was a beaut!”) rising from southern Galilee’s Jezreel Valley.  Mount Tabor (navel in Hebrew, probably referencing it’s location immediately north of Jezreel’s lush agricultural fields…and let’s just end right there!) by long tradition is the Mount of the Transfiguration, and our taxi deposits us at the edge of a long, broad walking promenade lined on either side by spiky, tall Italian cypress trees.  We stroll in the coolness of their shade, walking through a garden with dramatic mountaintop views of the panoramic hazy fields far below.  The promenade ends just shy of the imposing stone façade of our destination….THE Church of the Transfiguration, the Franciscan Roman Catholic edifice, while the older Orthodox sanctuary remains secreted to visitors nestled behind.  The man called the Holy Land’s architect, the inventive and fearless Italian Antonio Barluzzi (1884-1960), designed and executed this monumental pilgrimage church among several other Holy Land chapels he either built or re-designed.

But inside is the true masterpiece.  Barluzzi’s design is theological brilliance expressed in stone; three grottos below the high altar (Peter’s real estate development vision manifested at last!), one chapel each for Moses and Elijah, and that gold (yes, all real) background mosaic covering much of the rear dome ceiling.  It takes one’s breath away upon entrance.  Barluzzi sited translucent alabaster plates opposite the mosaic to such precision that on August 6th, the Feast of the Transfiguration, the sun shines through the plates to strike Jesus’ white garment, and it explodes with luminosity!  Seriously, who but an Italian would even think to do such a thing?!!  And Barluzzi takes pains to rehabilitate the disciples from Raphael’s centuries earlier visual slight; note Peter, James and John are almost on level with their transfigured Lord, all three staring directly at him with large eyes wide open.  Take that Renaissance says the 20th century!  Hah!  Who doesn’t love an Italian Holy Land architectural throwdown?!  As you may discern, I love this mosaic, this church and this entire mountaintop complex.

Transfigurazione, Ravenna.  Italian architects in Israel!  Byzantine architects in Italy!  C’est la vie!!  This 6thcentury AD/CE sumptuous mosaic was produced by the same historical pietistic explosion which produced Holy Land basilicas like Nativity, Bethlehem and Holy Sepulchre, Jerusalem.  Ravenna is significant in Italic history as the capital of the western Roman Empire in the 5th century before it fell in 476 AD/CE.  Following the Byzantine capture of the city, the Basilica of Saint Apollinare in Classe was constructed and appointed.  This is our only Transfiguration visual representation I have not personally visited, much to my regret.  It is a Byzantine jewel whose apse contains the 6th century work.  The scene is cast in pastoral green, with 12 sheep below shepherded by the loving attention of Apollinaris, the basilica’s patron saint.  A verdant pasture continues the work upwards, promising the abundant growth of early Byzantium.  Our three saints are firmly anchored to this world as larger sheep themselves before heaven intrudes cast in gold.  Expand your viewer to more closely examine the detail of this painstakingly executed mosaic.  Jesus is represented by a large cross with His face visible at the center.  Heaven’s forecast is airy, gossamer clouds conveying the motional floating of God’s realm far above.  Stars punctuate the lapis-blue center background, together with the first and last Greek letters (Jesus as Revelation’s alpha and omega, the first and the last).  And look closely straight above center of the cross to see God’s own hand reaching down towards His beloved Son.  I find this Transfiguration poignantly uplifting, warm and very comforting to encounter.

Transfiguration, Moscow.  Early 15th century AD/CE (1408) icon by the Byzantine Greek icon writer (for that is how one properly refers to a painter of Christian icons) Theophanes the Greek.  He lived in and worked in Muscovite Russia, contributing magnificent works like this.  Can everyone see how much our parish Transfiguration icon and banner are influenced by this Greek Transfiguration?!  Note the precise geometric lines in this work, Jesus occupying the “divine X marks the spot” in white luminosity surrounded by the (now) familiar blue nimbus.  Light shoots, thin and clear, laser-like from His transformed holiness throughout the scene.  Moses and Elijah are intimately situated, close by and on the same upper plane, while the disciples are yard-sale below.  Notice each disciple is positioned differently, inviting the icon viewer to reflect how each mirrors our own misalignment with Christ.  Jesus’ eyes are upraised while his hand is blessing we who gaze upon His majesty.  Note finally how desert-y dark the figures are and how stark the scene is cast, as if Theophanes is influenced by eastern European/south Russian peoples.  This is a bountiful iconic banquet indeed!

Well that just about wraps things up.  I’m sure we can’t squeeze in any more….wait….(no too long don’t do it!)….another Italian wants in (but no one’s reading anymore!)…the Neapolitans always get their say…can’t hold it in….AAAAHHHHH!  Bonus Fig!!!  Okay, everyone enjoy Bellini’s wholesale transport of our story into 15thcentury southern Italy’s culture.  Transfiguration captivates all!!